Embracing leadership, informally or within formal roles, can lead to a self-fulfilling prophecy of significant positive change and improvement in our industry.

Helping others get better, stay healthy, or navigate difficult periods in their lives is at the core of being a physician. Medical training and practice provide positive influences for individuals under our care. Leadership education and experience can expand those positive influences beyond individuals to a larger scale of health system improvement. Embracing leadership, informally or within formal roles, can lead to a self-fulfilling prophecy of significant positive change and improvement in our industry.

“It is our attitude at the beginning of a difficult task which more than anything will affect a successful outcome.”

While a poor starving medical student, I once enrolled in a drug trial to get some extra cash to help pay the bills. It was only going to be a three-week trial, so what the heck…easy money, right?

The study design was set up so that each week was different but randomized in the sequence of receiving the study drug and at varying dosage levels. I got through all three weeks, but one was exceptionally horrible — the first week — fraught with headaches, nausea, general malaise, fatigue, and more. I figured I must have received the maximal dose up front and had simply adjusted to the drug’s effects for the remaining two weeks.

To my surprise and dismay, in the first week, the drug was a placebo! Whew, was I embarrassed!

A self-fulfilling prophecy is a psychosociological phenomenon whereby one expects something and eventually experiences the realization of this expectation simply because one anticipates it, and one’s consequent conduct aligns to fulfill the original expectation.(1) As it turns out, a commonly cited example of a self-fulfilling prophecy is the placebo effect, when a person experiences certain outcomes because they expect an inactive “look-alike” substance or treatment to work, even though it has no known medical effect.

Robert Merton first introduced the term self-fulfilling prophecy in 1948 to denote a“false definition of the situation evoking a behavior which makes the originally false conception come true.”(2) There are two types of self-fulfilling prophecies: Self-imposed prophecies occur when your own expectations influence your actions. Other-imposed prophecies occur when others’ expectations influence your behavior. All opinions you value can cause this prophecy.

The Pygmalion effect is a type of other-imposed self-fulfilling prophecy that states that the way you treat someone has a direct impact on how that person acts. If another person thinks something will happen, they may consciously or unconsciously make it happen through their actions or inaction. Simply put, a false reality could actually become truth due to human psychological responses to predictions, fears, and worries associated with the future.(3) 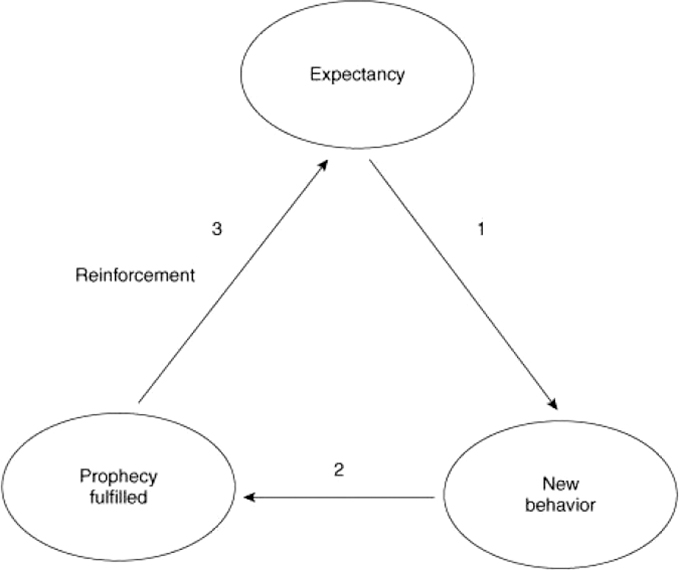 Self-fulfilling prophecy, also known as interpersonal expectancy effect, has a history and diversity of inquiry that has shown that the expectations of psychological researchers, classroom teachers, courtroom judges, business executives, and healthcare providers can unintentionally affect the responses of their research participants, pupils, jurors, employees, and patients.(4)

Self-fulfilling prophecies can yield both negative and positive results, and the interpersonal communication whereby this process often transpires can, therefore, have potentially strong implications for patient practices, physician leadership influences, and ultimately, the healthcare industry overall.

For example, a self-fulfilling prophecy becomes a potential asset when people are labeled as having talents, strengths, abilities, and positive resources. In a seminal study, teachers were told at the beginning of a school year that certain of their students were potential late bloomers who would be expected to excel during the school year under proper guidance. Even though there was nothing that set those students apart from their peers, several months later, their schoolwork had improved considerably.

Similarly, therapists may inadvertently change the way they approach a client based on the DSM diagnostic label applied, such that a therapist may change the way the client is treated based on whether a negative or a positive DSM label is present. Just as patients who are labeled with disorders may come to internalize their negative labels, patients may come to internalize positive labels.(5,6)

In the workplace, the Pygmalion effect can have a powerful influence on job performance and career development. If supervisors are told that newly graduated trainees are “among the best” at the time they join their team, the supervisors will tend to believe the workers perform better on the job than those for whom no special designation was given. Likewise, negative connotations about a class of workers are likely to affect the way in which those employees are regarded by their supervisors. They may be appraised as not performing to standards if that is the expectation.

The Pygmalion effect is logical, once understood, and concludes that expectations alone can raise performance above — or plunge it below — established performance levels.(7)

For now, just think back to how you were treated as a trainee, or recently, how you have been treating trainees or co-workers. Is it positive or negative?

Cognition, interpretation, biases, and mental processing each, among others, have a strong influence, negative or positive, on the physical and emotional reactions we all have toward stress or uncertainty. But these also represent ways by which we as physician leaders can help create a shift of the stress response toward a more positive outcome, thereby setting up the potential for positive self-fulfilling prophesies in both our professional and personal lives. Our patients, peers, and families will thank us.

Consider another example. Whenever patients enter our practice or institution during a period of crisis, their defenses are down and emotional distress is high. Beyond their illness or injury, the patient also inherently feels an urgency to decrease their level of emotional distress. Because they are motivated toward alleviating emotional distress, they are open to being influenced by the care delivery team and possibly altering their ways of thinking and behaving in a crisis.

As physician leaders, we can set the tone and approach not only for the patient in distress, but for the entire team of individuals involved in that immediate situation. And this approach can then be carried over to their ongoing care experience as the crisis passes.

Positive emotional stability, humility, sympathy, and empathy, coupled with an obvious caring approach toward others while demonstrating supportive leadership, goes a long way in creating the optimal environments of care for others. In this regard, all physicians are leaders!

When we think of our own behaviors and how to gradually shift our approaches in complex working conditions, it is important to recognize that change is stressful, even when it is beneficial. Change requires effort and conscious awareness. Five critical aspects of mental processing that play a role in stress management include(8):

Interestingly, confirmatory and implicit bias can be viewed as being similar to self-fulfilling prophecy. We all seek evidence that validates our prior beliefs or values and may underestimate or ignore evidence that contradicts our expectations.(9) And in a related manner, conceptual and empirical work on self-fulfilling prophecies and stigmas suggests that the anticipation of stigmatization will affect the individual’s affective, cognitive, and behavioral reactions. The belief that others consider one to be inferior will usually be distressing. It can stimulate either assumption-confirming or assumption-disconfirming behavior, depending on the situation and the individual.(10)

Parenthetically, an interesting twist on a related area of creating influence through others is that the positive skew distributions of expertise, creativity, and other learned accomplishments often result from what Merton dubbed in 1968 the Matthew Effect of the rich getting richer (so named in reference to a passage in the Gospel of Matthew).

As few as a tenth of the scientists may account for nearly all the significant scientific work in a given field. Though a few mavericks are exceptions, Nobel laureates and similarly distinguished scientists usually follow the Matthew pattern, which resembles wealth creation in that small initial advantages multiply over decades.(11)

We must all continue to seek deeper levels of professional and personal development and to recognize ways we can each generate constructive influence for one another at all levels. As physician leaders, let us become more engaged, stay engaged, and help others to become engaged. Exploring and creating the opportunities for broader levels of positive transformation in healthcare is within our reach — individually and collectively.

“If you expect the battle to be insurmountable, you’ve met the enemy. It’s you.”