This final installment of the four-part series addresses how leaders can overcome risk aversion and fiscal austerity to advance a business case for improving quality.

Healthcare leaders should develop an effective business case as a useful evaluative tool to assess the impact of implementing a proposed project or initiative, integrating quality and financial measures toward improving both. However, following the five-step method presented in the first article in this series (May/June PLJ) does not promise approval of the resources required to implement the quality improvement initiative.

Despite preparing a sound business case, including identifying and integrating the potential quality and cost implications, decision-makers often remain reluctant to move forward, given the potential downside for even a modest risk of failure.

In addition to the common challenges to creating the business case, including data limitations, financial language barriers between clinicians and non-clinicians, and a lack of acumen in the business of healthcare, there is a prevalent fourth rate-limiting condition: risk aversion.

Healthcare leaders are often averse to taking any modicum of risk on a new or unproven initiative with the potential for unfavorable or uncertain financial consequences. They tend to be overly cautious when selecting capital projects to pursue and typically favor “known commodities” with a predictable, albeit relatively lower, return on investment versus taking a calculated risk on an innovative, untested approach.

Leaders also can fall prey to spending too much time developing and deliberating possible options and their potential consequences, weighing the comparative financial implications and the reasons an initiative cannot or should not be considered. This common phenomenon is known as “paralysis by analysis.”

Forming a sub-committee, deferring to another committee or executive, pouring over excessive data, and waiting for a “better time” to consider the initiative are all common ways to deflect the need for impactful change and to avoid potential risk. Notwithstanding the basic human fears of change and failure, leaders are reluctant to pursue a de novo initiative, delaying or avoiding the pursuit of quality improvement and emerging growth opportunities.

Rather than succumbing to the naysayers casting aspersions on an unproven initiative, even one with general acceptance of need and potential benefit, leaders can evaluate the anticipated impact of their ideas by conducting a focused pilot.

Championed by the Institute for Healthcare Improvement as an extension of the Plan-Do-Study-Act model (Figure 1) introduced by Walter Shewart in the 1920s,(1) rapid cycle testing (RCT) is a simple, yet effective approach to implementing a small measure of change and observing the impact before pursuing a much larger, potentially time-consuming, and more costly larger implementation. RCT is a valuable approach for “proofing the concept” of an idea, accelerating trial-and-error learning to achieve measurable results, and sustaining quality improvement. 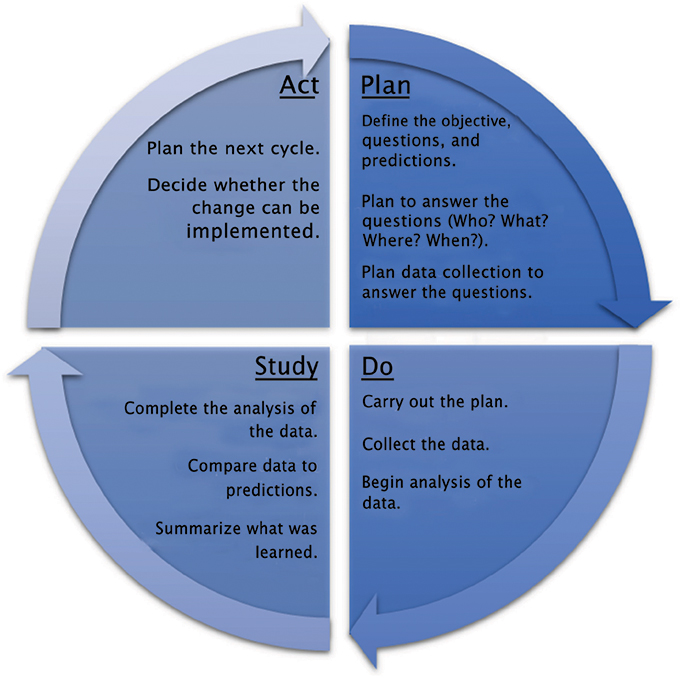 The steps for conducting a rapid cycle test are:

The critical performance measures for testing the impact of the planned change must first be identified, including both leading (quality) and lagging (financial) indicators. A robust approach might include clinical outcomes, access to care, patient experience, and relevant financial data to provide a multivariate assessment of the potential impact of the proposed change.

Next, a valid and reliable baseline or starting point of the planned change needs to be defined to assess the quantifiable impact of the project. Ideally, this should include at least 6–12 months of relevant historical data using the performance measures previously identified.

The results from implementing the pilot test should be observed and analyzed with at least 30 data points, both pre- and post-test, to establish statistically significant results. The results of the test can be used to prepare a run chart for observing the impact of the intervention on the selected performance measures (Figure 2) and can be repeated, as necessary.

Figure 2. Example of a Run Chart

Based on the results of the rapid cycle test, the pilot project changes can be permanently hardwired into the process, modified for further testing, or rejected as a bad idea. Rejected ideas should not be labeled as a failure in the negative sense, rather as an effective way to move upward along the learning curve toward achieving the goal by “failing” early, often, and small. As Thomas Edison stated when inventing the lightbulb, “I have not failed. I’ve just found 10,000 ways that won’t work.”

A recent systematic review indicates this problem can result in increased and unreimbursable costs as high as $23,000 per patient with associated extended lengths of stay.(2) Emergency departments are especially susceptible to blood culture contamination, with relatively higher rates due to the dynamic nature of emergent episodic care delivery.

Lab specimens for blood cultures are typically drawn by ED nurses. When the ED becomes overcrowded, the nurses are pre-occupied triaging and treating patients. Certified phlebotomists from the lab are often enlisted to help draw blood for diagnostic testing. Staff drawing the labs are identified by a discrete number to track contaminated specimens for quality control.

During an analysis of the root causes of hospital-acquired infections, it was noted that the cross-contamination rate for nurses in the ED was significantly higher than the rate for phlebotomists.(3) The likely explanation is due to phlebotomists’ specialized training and task repetition.

Unnecessary care resulting from false positive test results caused by cross-contamination resulted in an estimated annual waste of $2 million. ED leadership proposed hiring several full-time phlebotomists at a total annual expense of $250,000. Despite the potential significant return on investment from using phlebotomists to draw specimens in the ED, while allowing nurses to provide more top-of-license care and increase productivity, hospital leadership was reluctant to approve any funding for a quality improvement initiative without first conducting extensive research into best practices, identifying a benchmark among peer facilities, exploring examples and results from similar initiatives, and projecting the financial risk.

To overcome leadership’s apprehension for approving the unbudgeted $250,000 to hire additional staff, ED leadership sought a nominal $5,000 to pilot the proposed initiative. The pilot funding covered the cost of 200 hours of agency staffing for certified phlebotomists at $25 per hour. These temporary staff were deployed over a two-week period during the busiest ED shifts.

With nursing buy-in and support, the pilot showed a 50% reduction in cross-contaminated specimens while saving an estimated $50,000. Extrapolating the potential annual savings, hiring phlebotomists in the ED was expected to save $1.3 million. Subtracting the $250,000 cost of the phlebotomists, the projected annual ROI was approximately $1 million.

Beyond overcoming risk aversion and fiscal austerity, presenting or “pitching” a proposed business case for quality to advance an initiative for approval, with or without the benefit of a rapid cycle test, is the final challenge that must be navigated.

Connecting the organization’s mission, vision, and strategy to the business case proposal is essential for garnering support. Senior leaders are challenged with prioritizing how to best allocate increasingly scarce resources to support mission-essential needs. Aligning the potential impact of a proposal by drawing a direct line from those organizational priorities to the goals of the initiative encourages leaders’ saying yes.

The message should include a compelling call to action through a well-defined problem statement, including who is directly affected, how they are affected, and at what associated cost. For example:

Current use of nurses to draw blood specimens in the ED increases cross-contamination rates by 50%, adversely impacting patient care and safety, hindering staff top-of-license care optimization and satisfaction, and causing $2 million in unnecessary waste and cost.

Purposefully linking the quality and financial impact of the business case during the pitch supports engaging clinical and administrative leaders in a transparent and meaningful dialogue, creating space for improving communications and collaboration. The overarching and unifying goal is improving value for patients through addressing and reconciling quality and cost measures.

Given multiple and competing priorities, leaders often “fight the closest fire.” Therefore, framing the need for change around avoiding or mitigating a potential quality or safety crisis, left unmanaged, without deceptively manufacturing one, can compel leaders to act. As Nicolo Machiavelli said, “Never waste the opportunity offered by a good crisis.”

According to French philosopher Blaise Pascal, “We are generally better persuaded by the reasons we discover ourselves than by those given to us by others.” Thus, engaging key stakeholders by identifying their respective level of interest and influence is tantamount to success in advancing the business case for quality. Unfortunately, stakeholders who are influential in the approval process and goal achievement are too often involved only as an afterthought.

Gaining early stakeholder buy-in and maintaining it throughout the entire process is critically important. Frequent and focused stakeholder communications, including asking for input, is also valuable for engendering their having “skin in the game” commitment to a successful project outcome.

An effective technique for engaging key stakeholders,(4) including physicians whose support is essential, is creating a “we” versus “you” in the efforts required to achieve the goals of the proposed business case. The common approach to seeking stakeholder input is by asking, “What do you think of ‘x’?” The reply often becomes the sum and substance of the stakeholder’s contribution to the result, while creating an expectation for you achieving that result independently.

Consider asking for stakeholder input another way, “If you think ‘x’ is a good idea, how can we work together to make it happen?” The response will likely be more thoughtfully constructed, while enhancing the stakeholder’s willingness to engage and collaborate with you in creating the intended result.

3. Delivering the Pitch and Following Up

Clearly and concisely pitching the business case is the culmination of effort for improving quality. It affords an opportunity to address any lingering questions or concerns that might be hindering the necessary support for the initiative. An opportunity shouldn’t be squandered with a rambling or disorganized delivery; busy senior executives have limited time and attention span.

Therefore, winning the hearts and minds of key stakeholders should occur during the business case pitch opening using the bottom line up front or BLUF approach. Be clear, concise, evidence-based, and passionate in your proposal. Consider applying this simple framework:

For example, based on the previous case:

Hiring 4.2 full-time equivalent phlebotomists is projected to improve clinical outcomes and patient safety, reducing contaminated specimens by 50% and increasing patient experience scores by 15%, while eliminating unnecessary waste and cost by $1 million within one year of implementation.

As discussed, conducting a small-scale pilot test of the initiative can help allay the common fear of failing on a larger scale and suffering the potential financial consequences. The business case pitch is also an ideal time to ask for all the necessary resources, such as a budget, additional staffing, and more space.

Lastly, leaders should clearly define the next steps and timing for advancing the proposal to implementation, and periodically follow up with key stakeholders to keep them engaged and informed.

Developing a sound business case for quality requires leaders’ addressing risk aversion and resource constraints, especially for unproven initiatives. Conducting a small pilot to proof the concept for a larger initiative can uncover potential limitations that need to be addressed while increasing buy-in from key stakeholders.

Support from stakeholders can further be increased by aligning the business case pitch with the organization’s mission and strategic imperatives.

Go to https://www.physicianleaders.org/mbcqcalc for the full case on cross-contaminated specimens in the ED with Excel spreadsheet calculations provided in the article.