Providing patients in the country illegally with suboptimal care because of their immigration status is taking a burnout toll on some doctors, researchers say.

Dialysis patients in the country illegally are receiving suboptimal care because of their immigration status, and it's taking a burnout toll on some doctors, researchers say.

One patient’s death changed the course of Lilia Cervantes’ career as a physician.

The patient, Cervantes said, was a woman from Mexico with kidney failure who repeatedly visited the emergency room for more than three years. In that time, her heart had stopped more than once, and her ribs were fractured from CPR.

The woman finally decided to stop treatment because the stress was too much for her and her two young children. She died soon afterward, Cervantes said.

Kidney failure, or end-stage renal disease, is treatable with routine dialysis every two to three days. Without regular dialysis, which removes toxins from the blood, the condition is life-threatening: Patients’ lungs can fill up with fluid, and they’re at risk of cardiac arrest if their potassium level gets too high.

But Cervantes’ patient was in the country illegally. She didn’t have access to government insurance, so she had to show up at the hospital in a state of emergency to receive dialysis.

I practically had to take a class in immigration to understand what’s going on. Physicians just don’t understand it, and we shouldn’t have to.

Cervantes, MD, an internal medicine specialist and a professor of medicine at University of Colorado in Denver, said the woman’s death inspired her to focus more on research.

“I decided to transition so I could begin to put the evidence together to change access to care throughout the country,” she said.

Cervantes said emergency dialysis can be harmful to patients: The risk of death for someone receiving dialysis only on an emergency basis is 14 times higher than someone getting standard care, she found in research published in February.

Cervantes own study , published in the Annals of Internal Medicine, shows these cyclical emergencies harm health care providers, too. “It’s very, very distressing,” she said. “We not only see the suffering in patients, but also in their families.”

There are an estimated 6,500 immigrants illegally in the United States with end-stage kidney disease. Many of them can’t afford private insurance and are barred from Medicare or Medicaid. Treatment of these patients varies widely from state to state, and in many places the only way they can get dialysis is in the emergency room.

Cervantes and her colleagues interviewed 50 health care providers in Denver, Colorado, and Houston, Texas, and identified common concerns among them. The researchers found that providing patients in the country illegally with suboptimal care because of their immigration status contributes to professional burnout and moral distress.

“Clinicians are physically and emotionally exhausted from this type of care,” she said.

Cervantes said the relationships clinicians build with their regular patients conflicts with the treatment they have to provide, which might include denying care to a visibly ill patient because their condition was not critical enough to warrant emergency treatment.

“You may get to know a patient and their family really well,” she said. Providers may go to a patient’s restaurant, or to family gatherings such as barbacoas (similar to barbecues) or quinceañeras (milestone parties for 15-year-old girls).

“Then the following week, you might be doing CPR on this same patient because they maybe didn’t come in soon enough, or maybe ate something that was too high in potassium,” she said.

Other providers, Cervantes said, report detaching from their patients because of the suffering they witness. “I’ve known people that have transitioned to different parts of the hospital because this is difficult,” she said. 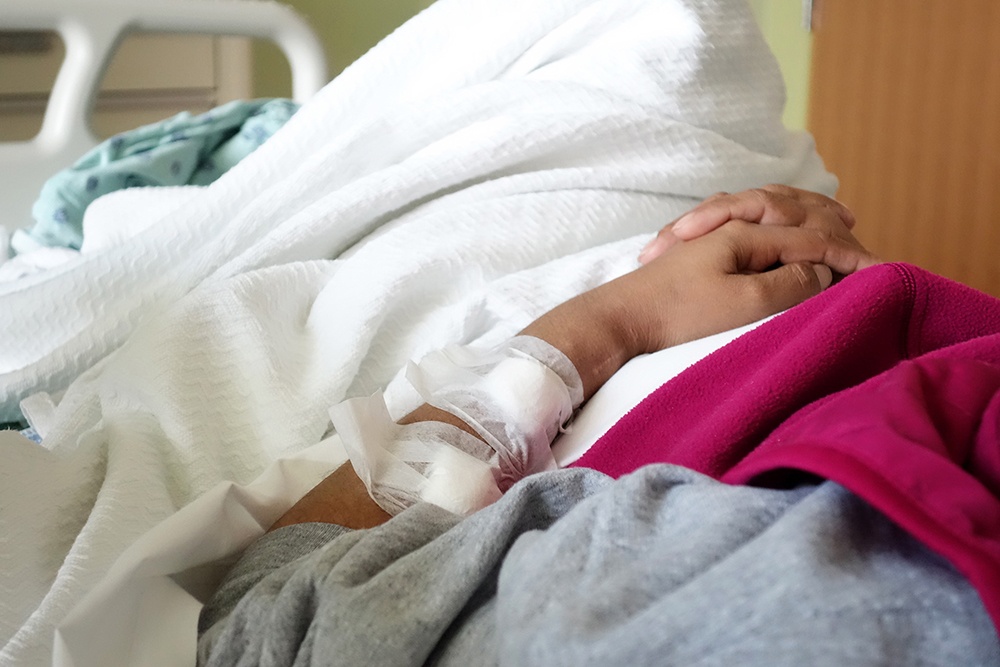 Immigrants in the country illegally often can't get routine dialysis care and have to wait until their condition worsens to receive emergency care. | Jake Harper/Side Effects Public Media

Melissa Anderson, MD, a nephrologist and assistant professor at the Indiana University School of Medicine in Indianapolis who was not involved in Cervantes’ study, said Cervantes research matches her own experience. She said that when she worked at a safety-net hospital in Indianapolis, patients would come to the ER when they felt sick. But some hospitals would not provide dialysis until their potassium was dangerously high.

To avoid being turned away when their potassium level was too low, she said, patients in the waiting room would drink orange juice, which contains potassium, putting themselves at risk of cardiac arrest.

“That’s Russian roulette,” Anderson said. “That was hard for all of us to watch.”

Anderson eventually stopped working at that hospital and, like Cervantes, has worked on research and advocacy efforts to change how kidney failure is treated with patients in the country illegally.

“I practically had to take a class in immigration to understand what’s going on,” she said. “Physicians just don’t understand it, and we shouldn’t have to.”

Providers in Cervantes’ study also worried that these avoidable emergencies strain hospital resources — clogging emergency departments when these patients could simply receive dialysis outside the hospital — and about the cost: Emergency-only hemodialysis costs nearly four times as much as standard dialysis, according to a 2007 study from researchers at Baylor College of Medicine.

Those costs are often covered by taxpayers through emergency Medicaid, which pays for emergency treatment for low-income individuals without insurance. In a study published in Clinical Nephrology last year, Anderson and her colleagues found that at one hospital in Indianapolis, the state paid significantly more for emergency-only dialysis than it did for more routine care.

Areeba Jawed, MD, a nephrologist in Detroit, Michigan, who has performed survey research into the issue, said “a lot of people don’t know that undocumented immigrants do pay taxes,” yet receive few societal benefits.

“There’s a lot of misinformation,” said Jawed, who has treated some of these patients. “I think there are better options.”

As a workaround, some hospitals simply provide charity care to cover regular dialysis for patients in the country illegally. But Cervantes argues that a better solution is a policy fix. States are allowed by the federal government to define what qualifies as an emergency.

“Several states, like Arizona, New York and Washington, have modified their emergency Medicaid programs to include standard dialysis for undocumented immigrants,” she said.

Illinois covers routine dialysis and even passed a law allowing these patients to receive kidney transplants , she noted.

“Ideally, we could come up with federal language and make this the national treatment strategy for undocumented immigrants,” Cervantes said.

Ultimately, Cervantes said, “at the end of the day, clinicians become providers because they want to provide care for all patients.”

Jake Harper is a health reporter with WFYI-FM , an NPR affiliate in Indianapolis, Indiana, and Side Effects Public Media. This story was originally published by Kaiser Health News on May 31, 2018__.