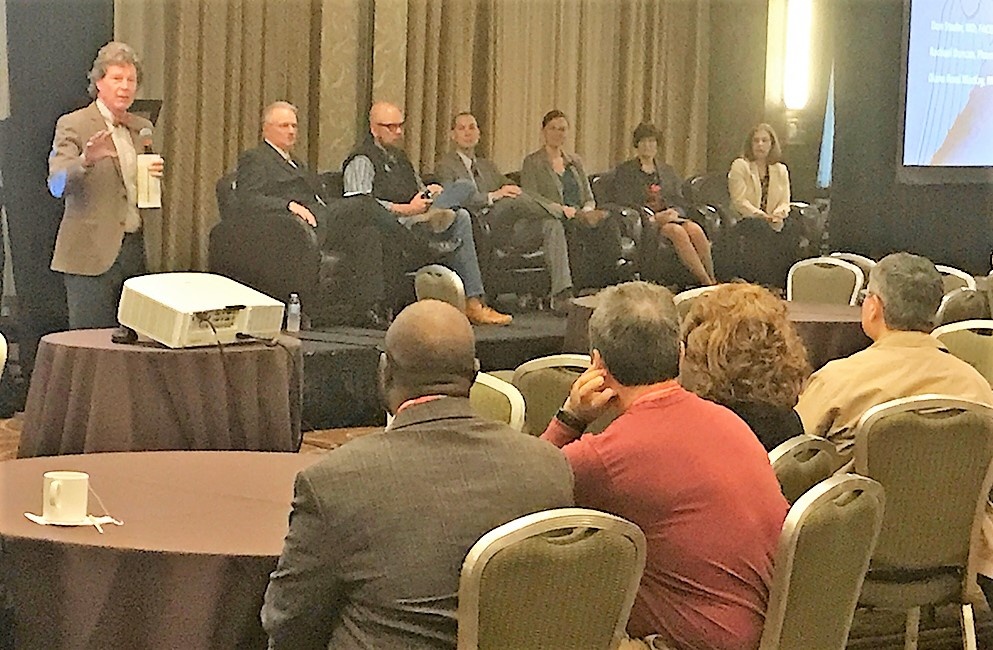 BOSTON, Mass. – It didn’t seem to matter what subject each of the speakers were addressing during the many presentations of this past weekend’s Thought Leadership Symposium – the discussions often circled back to the opioid crisis.

Case in point: Toward the end of Nick Cozzi’s peer presentation on brand loyalty, he delved into the force of social media apps like Yelp, prompting a conversation that migrated from online patient satisfaction reviews to physicians prescribing opioids because patients demanded them – and against their better judgment. And worse, the administration bowed to the patients’ will.

You could say the conversation was spirited and lively, if not passionate.

On Sunday, a six-member panel tackled the epidemic head-on – discussing the issue of stigmatization, the importance of interprofessional collaboration and steps that should be taken to address the issue within an organization and on a national scale.

Here are the key takeaways of the panelists: 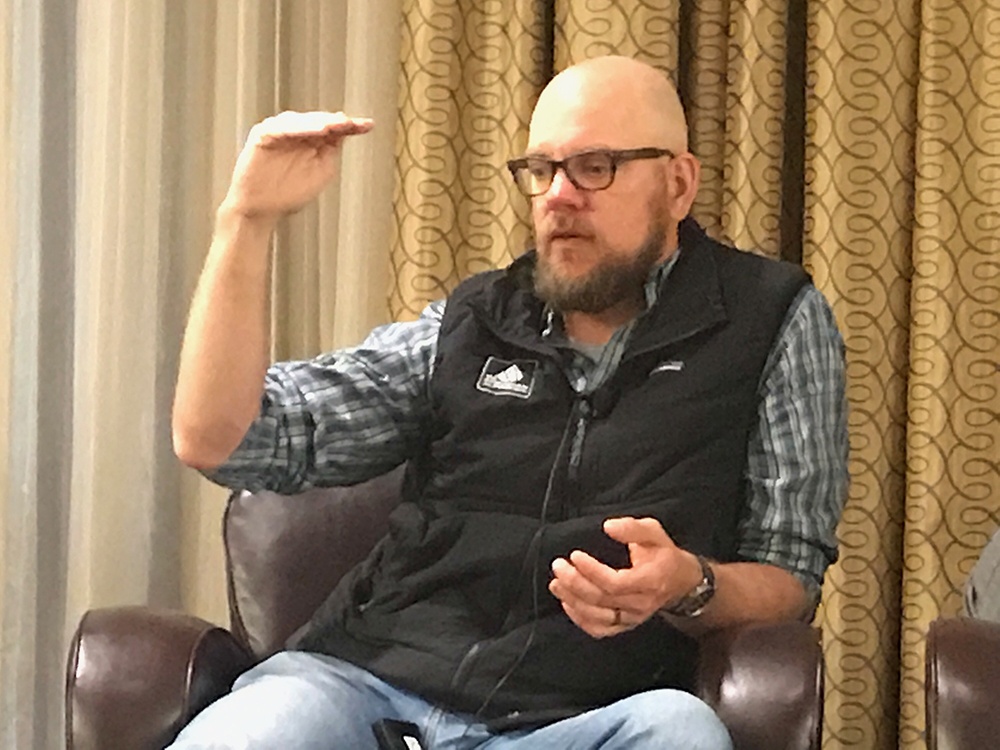 THE STIGMA OF ‘THOSE PEOPLE’

Stacy Bare a military veteran, a Bronze Star recipient, and director of the Sierra Club Outdoors:** “One of the things that I think is really discounted is dignity. And I think when you see a lot of your patients that end up with opioid addictions, nobody says, “I want to be addicted to opioids – or alcohol or cocaine. And then as you’re moving through the recovery process, it is really hard to find a community that is, a) going to accept you, and b) broadly, for people not to refer to you as one of those people.” 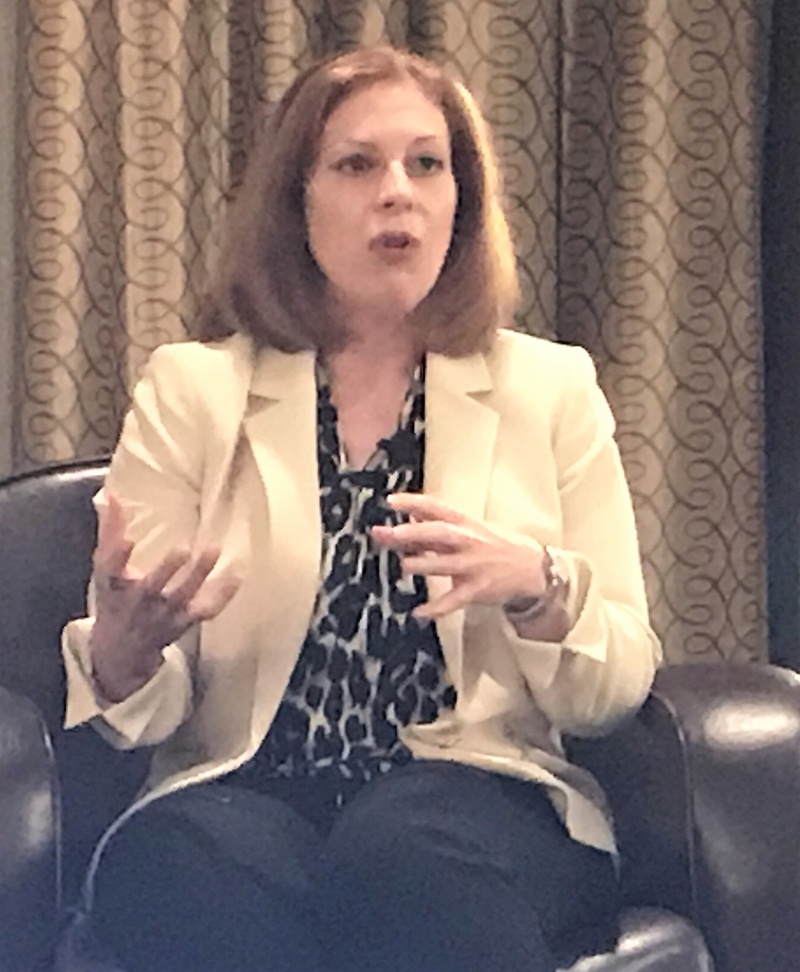 Deborah Pasko, PharmD, MHS, director of medication safety and quality at the American Society of Health-System Pharmacists: As a patient, Pasko suffered a shoulder dislocation with two fractures, a labral tear and a bicep tendon tear. But when the prescription was given to the pharmacist, she just shook her head no. Standing in front of the pharmacist, she was “trying to plea my patient side of it. As a pharmacist, it was heartbreaking for me, that for some other pharmacist to be standing in front of me and not treating me as a patient, but maybe just ‘I’m one of those.’ … We need to get out of this stigma. We need to have conversations with people and treat them like human beings. They are patients, and it doesn’t matter what you look like; you are standing there as a patient, period.”

Don Stader, MD, FACEP, emergency physician at Swedish Medical Center in Denver, Colorado: “Those patients. I know exactly who those patients are. I deal with addicts every single day in the emergency department – and one of those patients literally changed the course of my career and my life. 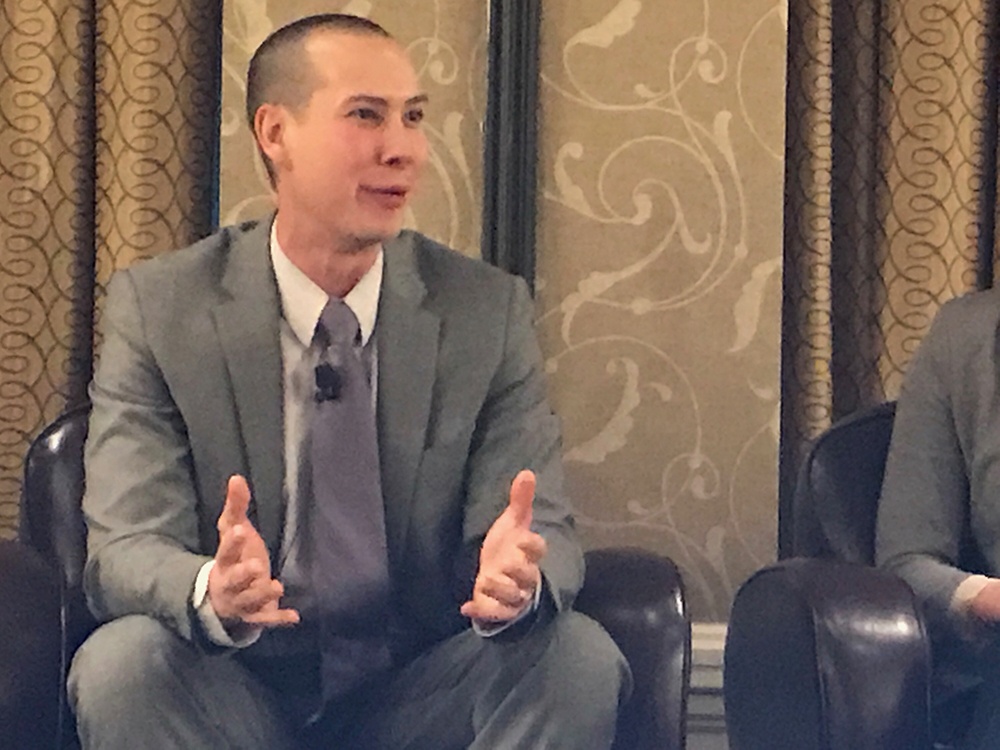 She was a 20-something-year-old who overdosed in 2016, came into my emergency department almost dead. Now, I’ve always hated dealing with IV drug users. I’ll be absolutely frank with you that this was one of patient populations that I always did not like to deal with. And then I went in and started talking with this patient who overdosed. I gave her the same spiel: ‘What are you doing? You’re throwing your life away.’

But then I asked her how she got addicted to opioids – how she got addicted to heroin, and she said, “It was actually through an ER doc just like you, who gave me Percocet for an ankle sprain. Now, that hit me like a ton of bricks because earlier that day, guess what I had done. I’d given someone Percocet for an ankle sprain. And that patient who I had stigmatized just as much ... and showing that patient that type of shame, I had been guilty of that. It led to a radical self-examination of 1) What I had been doing wrong in my medical practice throughout my whole career, and 2) how we could address an opioid crisis.” 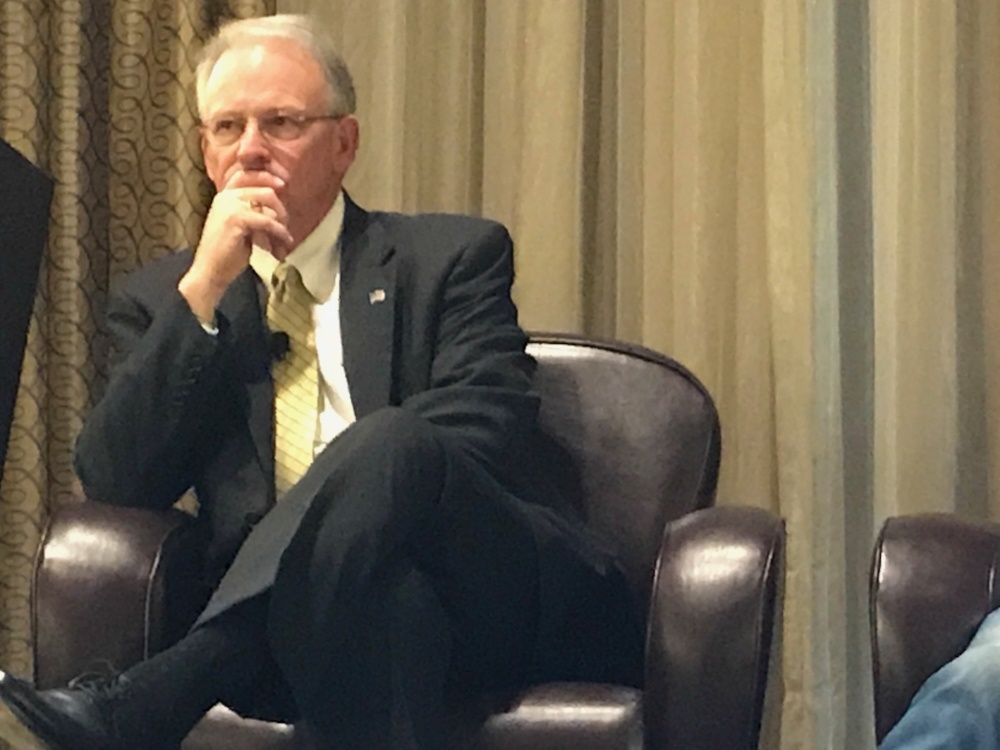 Michael Canady, MD, MBA, CPE, FACS, CEO at Holzer Health System in Ohio: “I have a fear that we’re going to swing the pendulum a little too far, and not being able to do the things we need to do as clinicians. Our legislators are acting as clinicians, and that’s scary to me as a clinician who writes prescriptions.

“As we all know, it’s a whole lot easier when a patient’s in your office asking for pain medications to give them a prescription than it is to spend 15, 20, 30 minutes it takes to explain to them why it may not be in their best interest, and that there may be other things that can help with their pain and diminish their risk of addiction and morbidity.”

Rachael Duncan, PharmD, BCPS, emergency department pharmacist at Swedish Medical Center: When she first joined Swedish, “I was seeing this overwhelming amount of opioids going out the door, and an overwhelming number of opioids being given to people in the ER. It was the answer for every type of pain. And I got thinking, ‘How did we get to where we are today?’ Well, when you were in medical school, what was the one type of pain medication that you were taught about? Opioids, right? Talk about anything else? Probably not. And I can’t tell providers that have been using the same thing, and that’s the only thing they know to use for the past three decades, to all of a sudden stop using it. Right? That’s not even fair. That doesn’t set you up for success.

“The answer is to expand your tool kit. Give you other things to use to still appropriately treat pain without using as many opioids. There are appropriate places to use opioids, and that’s OK. But the concept of ALTOs, or alternatives to opioids, is really the concept of a multimodal approach to pain management that’s more thoughtful.

“That’s where it becomes important to have your position champions. Physicians teaching physicians how to do trigger-point injections, how to do full nerve blocks. Those became staples of our pain treatment pathways. Understanding the different groups that have to buy into this, you also have to open up the conversation with your C-suite. You need to make sure messaging [regarding movement away from opioids] is there within your hospital and communicating it” and also marketing it to the community.

“The majority of the problem we can fix, that we have influence over. If there’s one thing I can convey … I think it’s very important to take ownership, figuring out the details to make it happen at your institution, and showing that data and showing that you’re being successful.” 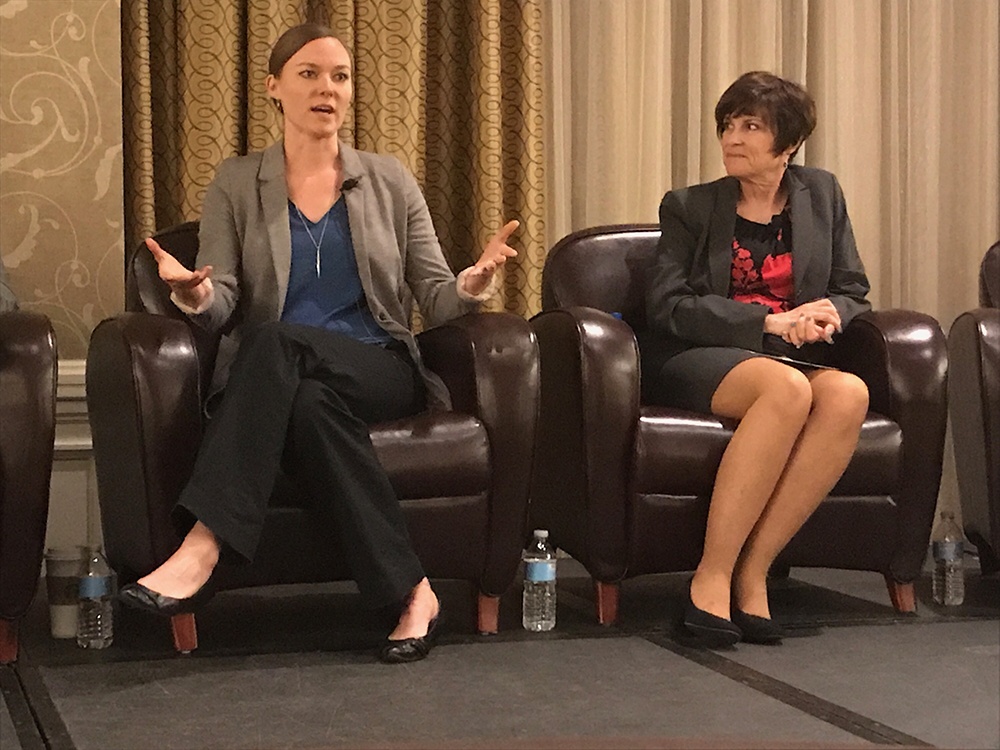 Diane Rossi MacKay, RN, MSN, CPHQ, clinical manager for the Colorado Hospital Association: “Our association’s journey started with one question: What was it that we could do to help our partner hospitals to help them move this opioid crisis outside of their hospital and engage and come up with a solution to this opioid crisis? We pulled people to the table and developed a strong guiding coalition, [which] really helped us as there were many balls that we were juggling in the air. It’s one thing to implement this in a hospital [but another across the state].

“Communication is so critical. But how do you communicate with folks internally to your facility but also externally? Clinical people, nonclinical people, the community. Everybody’s got to have the same talking points, because if you don’t, you’re going to hear, ‘Hey, that hospital doesn’t want to treat my pain anymore. They’re going opioid-free. I’ll have to go down the street.’ Now, if your internal people don’t know what you’re doing, they’re going to go out there and go, ‘Oh, my God. My hospital isn’t treating pain anymore.’ So communication was a challenge. One of the things we learned is everybody needs to be on the same page. And that communication needs to start at the top.

“The key is how do we work together, even across individual hospitals? That’s one of the things that you as leaders really need to do is ask one question: What is the problem we’re trying to solve, and how can we help our individuals be successful by removing barriers? Pull the right people together, develop a guiding coalition, remove barriers, develop the right tool kits, and disseminate that to the people you’re working with. It works.”

IT STARTS AT THE TOP

Stader: “The key thing is not to answer the question of how, but the question of why – why it’s so important that we learn to do things so radically different than ever before. And then with your physicians, if you’re not doing this already, one of the biggest quality of metrics that you have is how many opioids your physicians are prescribing both in and out of the hospital. If you start giving doctors their own data and saying this is why you need to change, that is a really powerful motivator. Just in our practice, we had some people … giving 50 percent of their patients opioids, but then we had others who had 10 percent. And if you look at this discrepancy and ask is this quality care at both ends, the answer is probably no.

Stader: “Here’s the thing that we’ve missed the ball completely: It’s a treatable disease. And what we’ve been doing is neglecting a treatable disease for so long because it’s stigmatized. And I will say in regards to buprenorphine , which we should all be using, is we’re further stigmatizing it by putting it behind a waiver. This is the safest drug that’s out there is buprenorphine. So in terms of thought leaders, which all of you are, one of the things that we should do is say, ‘Why the heck does that type of waiver exist?’ Let’s get rid of it. Let’s advocate that we make treatment more widely available because treatment will save lives.”

Canady: “This whole deal is about leadership. This is the American Association for Physician Leadership. And we are all too often forced to be followers of legislation that’s put in place by people who have no concept of clinical care. For me, it’s past the point of why. It’s no longer about why, it’s about how do we get from where we are now to where we want to be, and I suggest that every individual in the room call your congressman, call your senator, tell them to let us take care of this problem. Don’t tell us how many days of Percocet we can prescribe; let us do it. One size does not fit all for this problem. And if we allow them to lead us by the nose, we’ll never solve this problem.”

Andy Smith is a senior editor for the American Association for Physician Leadership.