Amid the deconstruction of Obamacare, public opinion and physician leaders seem to be moving toward a national health plan. But if it ever does materialize, it will be a long time in coming, experts say.

Amid the deconstruction of "Obamacare," public opinion and physician leaders seem to be moving toward a national health plan. But if it ever does materialize, it will be a long time in coming, experts say.

Some cases simply haunt Ed Weisbart, MD, CPE. That includes the 63-year-old woman who, caring for her grandchildren, had to choose between paying rent to stave off eviction and buying her blood pressure medicine. She chose the rent but hadn’t forgotten about her blood pressure, which was now measuring off the charts. 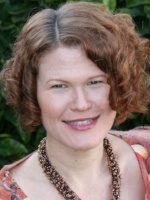 “How long can I live,” he remembers the patient asking, “without taking my blood pressure pills?”

It’s the kind of question medical school hadn’t prepared him to handle. And as the years passed, the Missouri physician has had to field such questions repeatedly. Whether it was because of insufficient coverage, high deductibles, inscrutable formularies or just a tight month, Weisbart said he found himself juggling increasing hours of billing and coding for a growing number of health insurance plans on one hand and the financial limits on his patients’ health on the other.

And he started to wonder: How do you do no harm in a health care system that doesn’t guarantee patients can afford their treatment?

The solution to this problem is far from settled. The Affordable Care Act tried a hybrid public-private model. Now, many in Congress are pushing less-expensive plans and high deductibles, trusting the free market to solve the problem. But after more than 30 years in practice, Weisbart has come to a different conclusion: It’s got to be coverage for all — something like Medicaid or Medicare expanded to everyone.

And he’s not alone. As Congress works to dismantle what the Obama administration established and moves to deregulate health care, there’s a growing appetite for the direct opposite — a public solution. But if it ever does materialize, it will be a long time in coming, experts say.

From Truman to Trump

The government has been trying to get it right on health care since the early 1900s, when Congress formed the Committee on the Costs of Medical Care. In 1945, President Harry S. Truman proposed that part of America’s “economic bill of rights” was “a right to adequate medical care and the opportunity to achieve and enjoy good health.” The other? The “right to adequate protection from the economic fears of … sickness.”

Months after that proposal, Truman fleshed it out, and the bill was, indeed, meaty. Not only did the bill provide for government-funded construction of hospitals in health care deserts, as well as funds for physicians and other health care providers to work in areas with none, but it also included a government health insurance program, available to all Americans, but not compulsory. 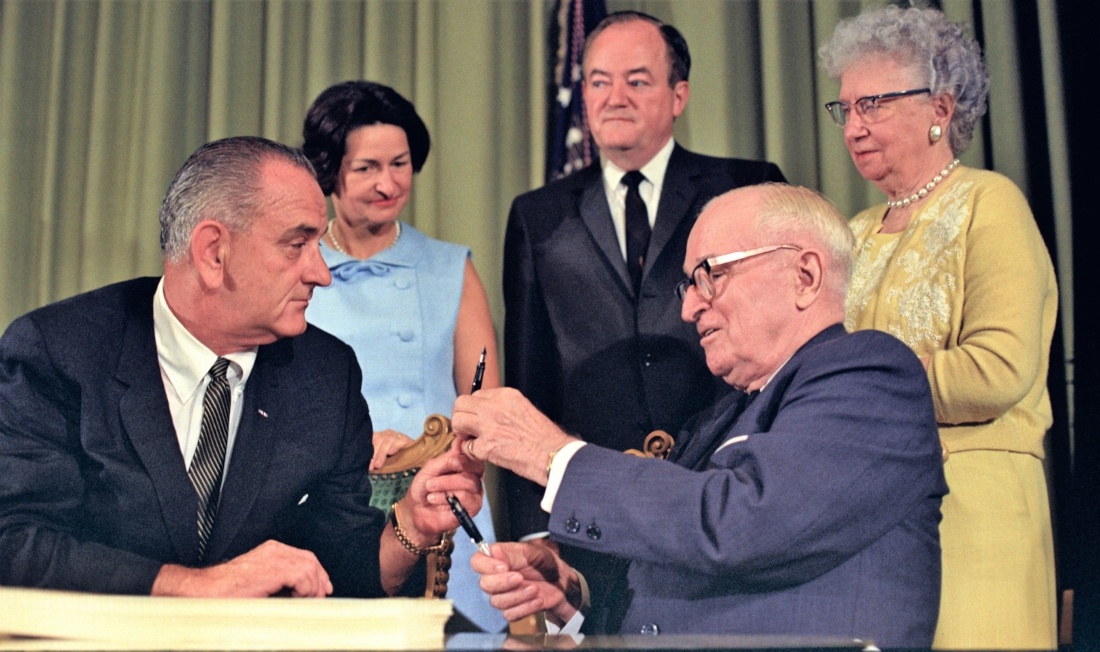 President Harry S. Truman proposed that part of America’s “economic bill of rights” was “a right to adequate medical care.” Twenty years later, he sat in support when President Lyndon B. Johnson signed Medicare into law at Truman’s presidential library in Missouri. Behind them, from left, are Lady Bird Johnson, Hubert Humphrey and Bess Truman. | LBJ Library

“The time has arrived for action to help them attain that opportunity and that protection,” Truman told Congress.

But, in fact, the moment hadn’t. Though the bill was introduced repeatedly, it never reached his desk.

That was followed by a proposal by Truman’s successor in the Oval Office, Dwight D. Eisenhower, to create a fund to help private insurance companies cover more people. Federal workers got public health insurance in 1960, followed by the enactment of Medicaid and Medicare under the Lyndon B. Johnson administration.

There have been several proposals since then: Richard M. Nixon’s Comprehensive Health Insurance Plan, Jimmy Carter’s Children’s Health Assessment Program, and Bill Clinton’s managed competition plan. But none passed until the ACA in 2010.

And with the ACA still targeted by President Donald J. Trump, people are asking what’s next.

The Trump Vision of Health Care

So far, what’s next is a return to many pre-ACA policies. Trump publicly has supported market-driven solutions, such as high-deductible plans and associated health savings accounts. He is also calling for a move back to buying insurance across state lines and health plans that don’t cover all of the ACA’s so-called essential health benefits, which include pregnancy. And recent announcements from the Centers for Medicare & Medicaid Services that the agency will allow waiver requests from states seeking to impose work requirements on enrollees could mean a drop in Medicaid rolls.

Harvard Business Review called 2017’s tax overhaul bill “the most important health care legislation enacted since the Affordable Care Act,” and here’s why: It repealed the ACA’s mandate that all Americans must have health insurance or pay a tax penalty. Without the penalty, the Congressional Budget Office estimates that 13 million people will lose their insurance or choose to abandon it by 2027.

And as people exit the exchanges, those with chronic conditions are expected to make up a larger proportion of the risk pool — meaning that premiums are expected to rise. A report from the Commonwealth Fund says, for instance, premiums for older adults could rise by $1,469 in Arizona and $1,817 in Nebraska.

Swing of the Pendulum

But Truman’s idea of a national health insurance plan never really went away. In June 2017, the California Senate passed a government health insurance program bill that would cover all state residents. Around the same time, New York state legislators reintroduced the long-standing New York Health Act — a universal coverage bill that has passed in the state Assembly several times.

How do you do no harm in a health care system that doesn’t guarantee patients can afford their treatment? That's a question many physicians ask themselves today.

Meanwhile, legislators in Colorado, Nevada and Vermont, among others, have been proposing universal coverage plans for years. The only states with anything approaching universal coverage are Hawaii, which in 1989 added a state health insurance plan to cover people who are not insured by Medicaid or Medicare but cannot afford private insurance, and Massachusetts, which has something resembling a universal plan.

It’s not just happening on the state level. Last year, Congress members introduced two bills proposing different ways to expand government health insurance from the elderly, the disabled, the indigent and veterans to encompass all Americans. So far, all the bills have stalled either in committee or in one house of state legislatures.

A Change in Momentum

None of the federal bills, of course, has a chance in the current political climate, says Jim Morone, professor of public policy at Brown University, who has written about the history of health care reform. But that doesn’t mean they are meaningless.

Indeed, he says, every president has had to address health care — and future presidents will, too. By following the politics of health care reform over the decades, he says he has learned a few things:

A president’s leadership is essential to get a health care bill passed.

“The electoral glow wears off quickly,” he says. “That’s why Clinton lost on health care. He didn’t submit it for a year after his election, and by then all anyone could think about was, ‘Will Republicans take Congress?’ ”

In this sense, he says, both Obama and Trump got it right, addressing health care at the very start of their terms.

The other thing he learned in his research — particularly on Truman’s health reform efforts — was that keeping up a drumbeat of moral outrage about the rightness of health care reform can work, even long after a bill is thought dead in the water.

“When Clinton lost health reform, what people said was that maybe it wasn’t the right proposal. Truman didn’t do that,” Morone says. “He said directly, ‘We lost because of politics, and this is still the right thing to do.’ ”

Where do you stand on the idea of a single-payer health care system? Would it help you? Would it hurt you? How? Share your thoughts with fellow physician leaders, and we might be publish them in an upcoming issue. We welcome letters, commentaries and researched manuscripts on this and other health care leadership topics.

To send a letter for publication, or to request a copy of our manuscript guidelines, email us at journal@physicianleaders.org.

The result is that when Johnson signed the bill creating Medicare and Medicaid — an adoption of Truman’s plan — Johnson did it with the former president at his side. “In this way,” Morone says, “Bernie [Sanders] is doing it right.”

Physicians in the Lead

To a certain degree, that’s where physician leaders come in, Morone says.

And there are signs physicians may be ready to play that role. While physicians have typically come out against public insurance options — the American Medical Association has been among the most vocal opponents of such plans since the Truman administration — recent surveys suggest physicians are changing their minds.

In a recent survey by the market research group Merritt Hawkins, 35 percent of physicians strongly opposed single-payer health care. But the majority — 56 percent — supported it.

Those statistics conform to results of a June 2017 Pew Research Center poll, which found that not only did 60 percent of Americans say the government is responsible for ensuring all Americans have access to health care, but more than half of those people say they support a single-payer system, such as Medicare or Medicaid expanded to all Americans. That’s a 12 percent increase from 2014.

Weisbart is one of those leaders. He is spending his retirement doing something he never thought he’d do: After 20 years as a primary care physician in Chicago, and then another several years as chief medical officer of a mail-order pharmacy, he finds himself running the Missouri chapter of the Physicians for a National Health Program. The first year he worked with them, he gave 35 presentations around the state, mostly trying to explain what a national health program means. In 2017, he did 100 presentations.

“At first it was us pushing” to get in the door, he says. “That’s not the case anymore. Now most of the presentations I give, they come to me. They say, ‘We want a speaker on Medicare for all.’ ”